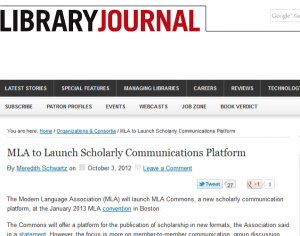 In her October, 2012 Library Journal article, MLA to Launch Scholarly Communication Network,  Meredith Schwartz describes how the Modern Language Association, under the directorship of Kathleen Fitzpatrick, is building its MLA Commons based on “Commons in a Box” software.

“… is working toward a federated commons-of-commonses … developing greater connections across scholarly societies as well as with universities and other higher education organizations.

The MLA Commons is set to launch in January, 2013.